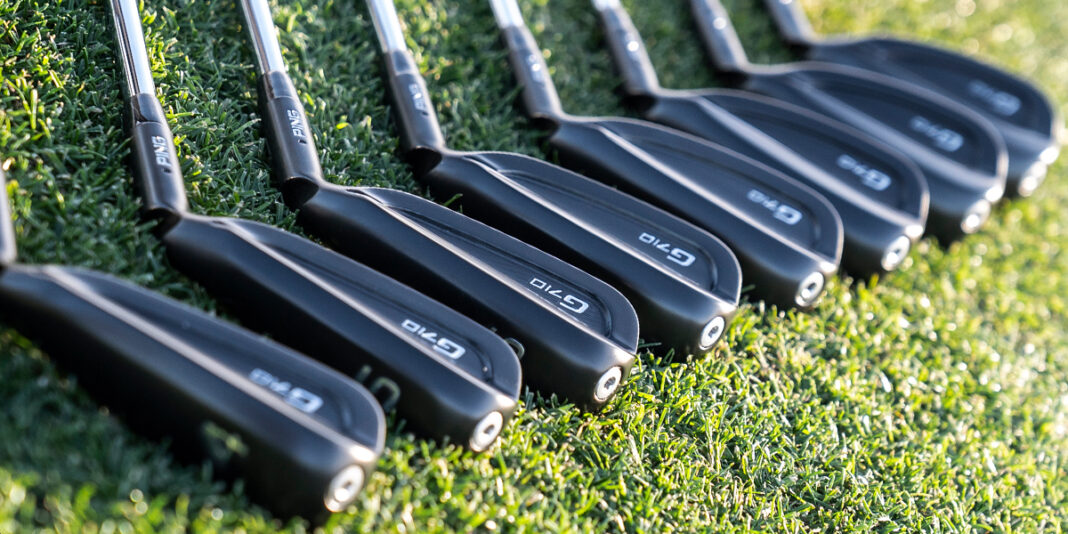 PING brings a new look and improved feel with the G710

PING is turning heads with the new G710 irons, giving golfers an iron with a familiar feel but an aesthetic that we haven’t seen from them since the G30. We’re going to review these new beauties, take a look at a student success story and have a conversation about modern iron designs.

Jump to the section you want to read:

A trend of hollow-body irons has been set by the golf industry in the past few years and PING is keeping that trend going. However, the new G710 irons aren’t like all of the other hollow-bodied irons that preceded it. So what it is that separates the G710’s from the pack?

For one they come with a maraging steel face for higher ball speeds and longer distances. With an MOI over 3300 g/cm2, which is one of the highest we’ve ever measured, making this a great option for any golfer seeking maximum forgiveness. Improved sound thanks to a thin layer of hot melt behind the face, a hydropearl chrome finish with a black PVD coating repels water to improve performance through the turf and in wet condition, and for the first time ever, PING is releasing irons that come stock with Arrcos Caddie smart grips.

After spending some time in a hitting bay with these irons, I have to say that I really liked what I saw. The sound was much improved from the G700 and my distance numbers were fantastic. The stealth black finish was my favorite part though. These irons are beautiful.

Today we’re focusing on a club fitting from GOLFTEC Tulsa. Coach Tanner Higgins helped a student who was very unhappy with how his current irons were performing. He felt that he was leaving distance on the table and he was right! Getting fit into the G710 irons along with the right shafts was able to give him another four mph of ball speed and an additional 10 yards!

This trend of hollow-bodied irons has been around for a while now and it looks like it’s here to stay. PXG started the trend back in 2015 with their Gen 1 irons, and most other brands have followed suit. Taylormade has the P790, Titleist made the AP3, and PING has had the i500, G700, and now the G710. Typically the hollow cavity of these irons contain a dampening material to help provide the solid feel of a traditional iron.

So what is it about these irons that make them so popular? Brad Skupaka, GOLFTEC’s Director of Teaching Quality, says it is due to the added distance they provide without having to sacrifice ball flight. “Modern irons are designed like metals woods, hollow bodies yield higher ball speeds. The ball traveling faster means it peaks higher, lofts are stronger to allow you to hit an iron a certain height, if today’s irons had traditional lofts they would go too high.”

I personally swing hollow-bodied irons and I absolutely love them. They provide a combined element of distance and forgiveness while still having a top-line that really fits my eye. I’m no psychic, but if I had to guess about the future of irons I would say that this trend isn’t going away anytime soon.

Everything you need to know about putter fitting